Refer friends now and get a 50 € bonus each!

This is how referring friends works at Ginmon:

Invite your friends to Ginmon! Every successful referral of a new customer we reward with 50 € each for you and the referred person to your Ginmon account.

If you want to refer someone, you can share your personal referral code with your friends and acquaintances, which they would then have to enter in the corresponding input field during registration.

The promotion is only valid if you both have not participated in any other promotion within the six months and the personal referral code has been used.

Are you already an investor and want to refer friends?

Are you already a Ginmon customer and satisfied with your account? Recommend us to others and enjoy a €50 bonus – for you and for each new customer you refer.

You will find your personal promotional code in the customer center at the top right after clicking on your name under „refer friends“.

Receive a bonus of € 50 for each new customer referred to your Ginmon account.

You are not yet a Ginmon customer?

You can open your personal Ginmon account within minutes. After just three steps, you can sit back and relax and have access to your savings invested in the capital market at any time. Of course, without minimum term and hidden costs.

In a few minutes you answer a few questions on topics such as your personal risk affinity and personal life situation.

Select your desired one-off payment and savings rate using a slider. From this, our technology calculates your optimal portfolio.

Step 3: Lean back and relax

After opening the securities account, our technology automatically implements the investment strategy. You can view the current status online at any time.

Who can take part in the “Customers refer Customers” program?

Every Ginmon customer can take part in the "Customer refer customer" program.

Where can I find my personal promotional code?

In your Ginmon account you will find your promotional code by clicking on your name in the top right under the menu item „Become friends„. Your friends and acquaintances then have to enter this code when they register. 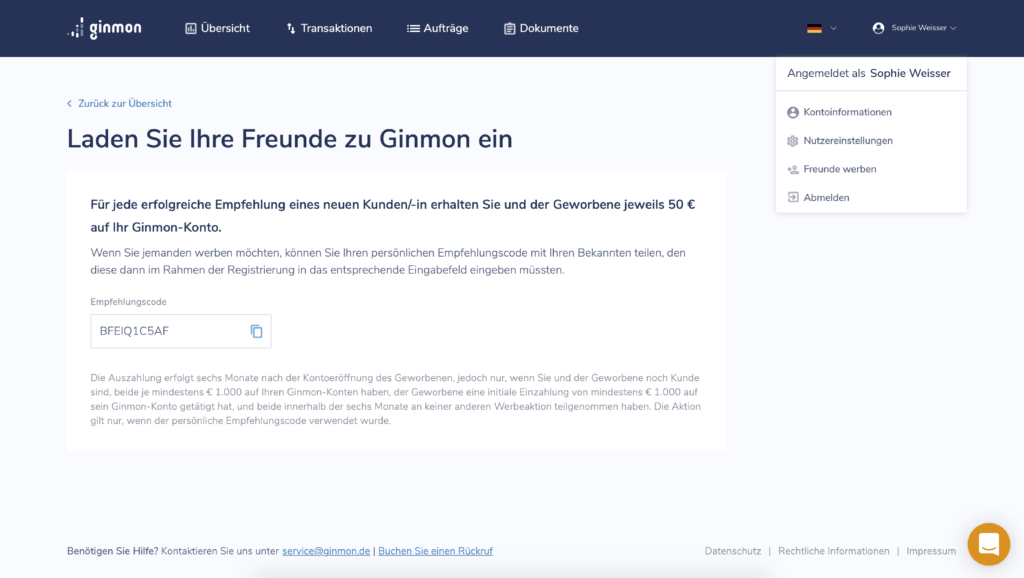 When and how do I get my bonus?

The bonus will be credited to your deposit account as soon as the new customer has successfully registered with your promotional code and has been a Ginmon customer for at least six months.

How many friends and acquaintances can I refer?

Advertise as many friends and acquaintances as you want. As soon as they have successfully registered with your personal promotional code, you qualify for the award. You will receive the bonus for each new customer successfully recruited.

Our customer with the most recommendations was able to recruit more than 60 friends and acquaintances at Ginmon in this way.

What are the requirements for participation in the program?

Your investment on the smartphone

Download the Ginmon app and enjoy the benefits of 100% mobile investing. Available for iOS and Android.